When I was young, I remember on Sunday evenings we frequently cooked a whole roasted chicken much to the delight of all the members of the family. My mother had the pleasant habit of enveloping the chicken with potatoes and other root vegetables, rub the chicken rigorously with oil and spices and roast until the skin became crispy and golden. With this dish she often served a creamy mushroom sauce - which was absolutely lovely. And I have routinely repeated my mother's recipe in one way or the other, and even disclosed the results on my blog.

When I traveled to Spain for the first time I saw how the locals cooked their chicken at these rather humble resturants that specialised in grilling the birds - pollos asados! There were special places which sold only roasted chicken skewered on a spit. I remember the when I took the first bite, it was unbelievable how juicy the chicken was, and the skin crackling and crispy - almost like soft biscuits and the meat completely tender. I lingered for a few moment in the restaurant and observed them cooking, and how they collected the fat/juices that dripped off the chicken into a trey att the bottom and then they repeatedly basted the chicken with the liquid. Holy moly ... how tasty I thought that food was - and still do!


After I gained possession of a proper oven for the first time I have from time to time cooked this kind of chicken. This is of course, by any measure, the perfect comfort food. This time I thought that instead of serving the chicken solely with the broth produced through the cooking, I would try to create something which resembled my mother's sauce. Low and behold, I think I succeeded!

This was in no way complex cooking. I say this often, but it specifically applies this time! I think the most complicated element of the procedure is getting the chicken on the skewer and then fasten it securely enough so it will properly rotate under the grill.

First I took a pinch of butter, maybe 30 gr, and placed in a pot with a similar amount of extra virgin olive oil. Heated until the butter is melted, which is then used to brush the whole chicken carefully so the entire surface is covered in a little fat. After this the chicken was thoroughly but simply spiced; plenty of salt and pepper, and a whole lot of paprika. Nothing remains but to stick the chicken into a piping hot oven and the grill turned to full blast. It is always a bit difficult to tell how long the chicken needs to be cooked since it is determined by the weight. So the best option is to use a thermometer and make sure the core temperature reaches 84 degrees - and then all is well. I poured around a liter of water, infused with a little stock, into the cooking trey below the chicken to ensure I would gather all the juices running off, both for basting and then of course also to use for the sauce.

The sauce was made in the following manner: I cut 15 mushrooms into slices, which were fried in oil/butter on a low temperature until beautifully golden. Put them to the side until the chicken is done and ready to be served. Carefully pour the broth from the chicken into the pan (800 ml), season, add 200 ml of cream and a dash of corn starch to thicken the sauce. Allow it to reach a boil and then simmer on low heat until the taste of the corn starch has evaporated.

My brother took care of the fries as so often before. This time he tried to emulate country fries, by allowing the skin to remain. The fries were prepared and cooked as they should be: double-fried. First deep fried on a lower temperature for about 4-6 mintues, and then removed from the pot and allowed to cool down on some paper towels. Once they have cooled, re-introduce them to the oil, this time at around 180 degrees, and fry until golden brown and crunchy. Don't forget to salt!

With the food we served this lovely salad, which is in effect nothing other than the Italian salado tricolore slightly transformed. Tricolore is the classic dish where you layer ripe sliced tomatoes with slices of mozzarella and a few leaves of basil in between layers. I did the same except that I served the tricolore on a bed of green leaves and scattered some thinly sliced red onion over the top. Of course I drizzled a bit of olive oil over the whole thing as well, accompanied with fresh lemon juice and salt and pepper. 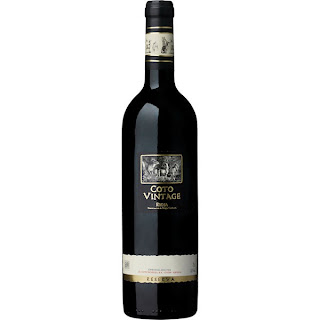 With the food we drank very good red wine. Coto Vintage Crianza from 2006. This wine I have had before - but was even more pleased with it this time. It was a lovely accompaniment to the pollos asados! The wine is from Spain and is made from Tempranillo grapes. It is allowed to mature in oak barrels for 12 months, and then in the bottles for 2 years before it is put on the market. The wine is dark in the glass, spicy and tastes of dark fruit and cherries. Soft flavor of oak with a warm after taste. Tasty wine!