The name of this famous salad is often falsely attributed to Julius Caesar. However, the Roman Emperor had nothing to do with this salad - he probably had bigger fish to fry - instead it was first assembled by a man called Caesar Cardini. This latter Caesar was a chef who operated number of a restaurants in the States and Mexico. Legend has it that on July 4 1924, Cardini invented the salad in a moment of desperation as he realized that his Tijuana restaurant had run out of supplies in the kitchen during the height of the evening rush. So he threw together the remaining ingredients and the Caesar salad was born! However, not everyone agrees this was the case. Cardini's friend, Paul Maggiora claims to have made the salad for the first time in 1927 and presented it to a group of American pilots, and consequently named the salad "Aviator's Salad". Cardini's brother, Alex, also stated that he had invented the salad in 1925, also for pilots. Who the real author of the salad is, we'll never know for certain. What we do know is that it's tasty and it helped bring Caesar's restaurants to fame.

I tasted the salad for the first time around five years ago at a fancy restaurant in town and it was, as everybody knows, delicious. The salad was big  and meaty with large pieces of crunchy romaine lettuce, succulent chicken, beefy chunks of Parmesan cheese, and topped with a sharp heavy sauce. Ever since then it's been a special favorite of mine! I encourage you to make the salad, it's equally simple as it is scrumptious - especially if you make the dressing from scratch.

1. Season the chicken breasts and fry on a pan. Once they begin to color, tranfser to an oven-proof dish and bake in a 180°C oven. Cook until the internal temperature is 82°C. Remove from the oven and set to the side.

2. Cut the bread into dice-size pieces and fry in garlic oil until their golden-brown and crunchy.

3. Fry the bacon and set to the side.

4. Tear the romaine lettuce into smaller leaves, chop the tomatoes and carefully arrange in bowls.

5. Cut each chicken breast into 3-4 pieces and place on top of the lettuce and tomatoes.

6. Place the bacon on top, followed by the breadcrumbs and finally the Parmesan cheese.

7. Pour a generous amount of dressing over the lot.

1. Put the anchovies and garlic into a mortar and mash together until you have a rough paste.

2. In a bowl, blend together the mayo, sour cream lemon juice and water.

3. Add the anchovies and garlic-paste and season rigorously. Mix well together. 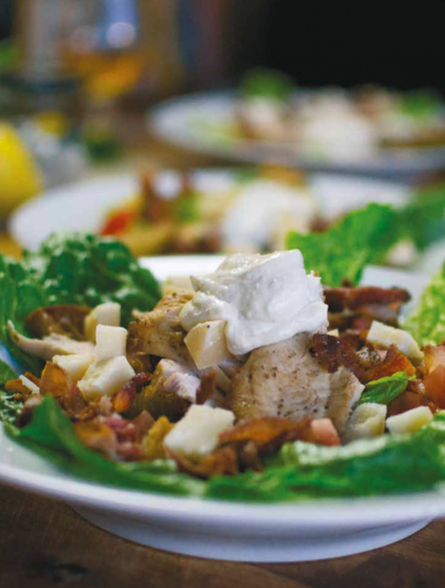 The feast doesn't have to be complicated!
Posted by Adorno at 08:55 6 comments: