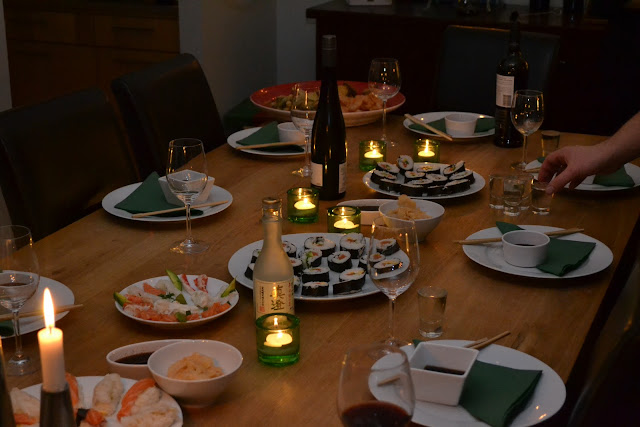 My daughter was suddenly overtaken by this idea – around the time we arrived back home from our skiing vacation in Austria – of making sushi and inviting all our good friends over to our house to join in on the feast. Certainly not the worst idea she has come up with! A few of the neighbours and us have routinely thrown sushi-feasts and it is always a great joy to create and eat sushi.

As a rule I have invited people over quite early so everyone can work collectively at the sushi making. Cutting down raw fish and wrapping in seaweed and rice is much easier than most people believe. Somewhere I heard that in Japan, it takes 12 years for someone to become a legitimate sushi chef, a sushi master. He must be pretty talented in cutting down fish and rolling up the maki rolls! Anyways, in sushi making the same rules apply as in other cooking – you have to carefully choose your ingredients. The better the quality of the ingredients – the better the sushi.

Nori sheets are made from seaweed that is grown by the coasts of Japan. The seaweed is collected, pressed and then rolled out into thin sheets, and finally dried.  The sheets usually have a green hue but some develop a darker greenish-black color through storage. The sheets you can get in most stores nowadays. Wasabi is often sold as paste or grounded; it is extracted from the plant Wasabia Japonica and can pack a punch. Beginners take caution! I always buy pickled ginger, which is endowed with rather sweet taste, and is customarily served with sushi so as to clean the palette in-between bites. For the faint of heart that find wasabi too strong, you can always dilute it with a pinch of mayo or crème fraiche. For this suggestion, orthodox voices would accuse me of blasphemy, but sometimes food simply has to be adjusted to delicate palettes! 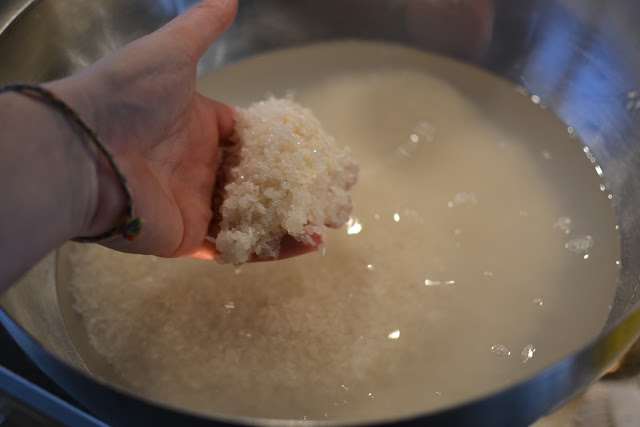 The first step of all sushi making is minding the rice. Typical sushi rice is so called ‘short grain’ rice, which contains a whole lot of starch and as a result has the tendency of sticking together before and after boiling. As a matter of fact, they contain such an amount of starch that most producers advise you to rigorously rinse them in cold water before you boil them. A good rule of thumb is to wash them until the water is transparent and clean (when you start, the water is thoroughly clouded). 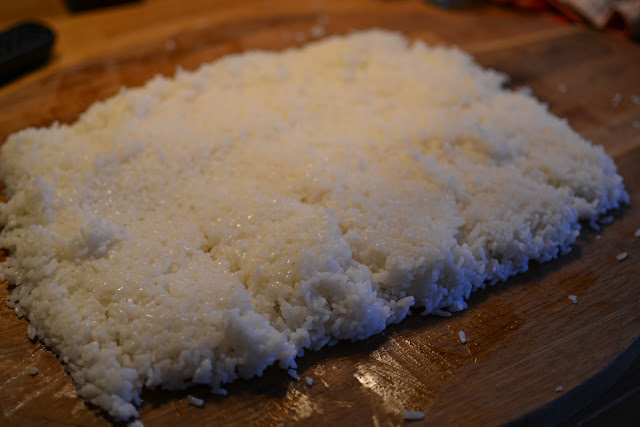 Boil the rice as rules dictate. Transfer the pot from the hob when the water has evaporated and allow it to rest for in the pot for 10 minutes. Then distribute them on a wooden-mat and mix with rice vinegar, sugar, salt and mirin, which is carefully and evenly poured over the rice (for 600 gr of rice: ½ cup vinegar, ¼ cup sugar, ½ teaspoon salt and a few drops of mirin).

Using one hand, carefully turn the rice over with a wooden spatula, and with the hand cool the rice with for example a hand fan. They should be at around room temperature when you begin making the rice. 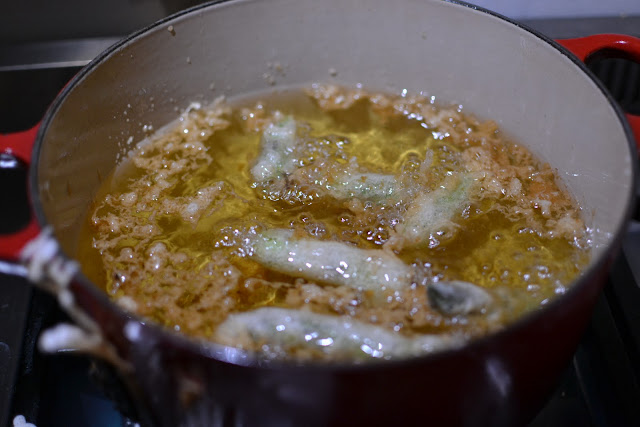 The tempura dough is quickly made. Stir together half a cup of flour, equal amount of potato starch and 1 teaspoon of baking powder. To this you add 1 cup of ice-cold mineral water. For the tempura I used thinly sliced sweet potato and zucchini, and sugar snaps, which are rolled in the dough and deep fried. I prepared the dough seconds before and in this way it is ice-cold when it meets with the hot oil, which gives it just the right crispy and crackling texture. When it starts to color remove it from the pot and transfer to a paper towel so you can dry off some of the excess oil. At this point, move the tempura to a plate and give it a moderate drizzle of salt. The sweet potato requires slightly longer cooking than the zucchini and the sugar snaps. 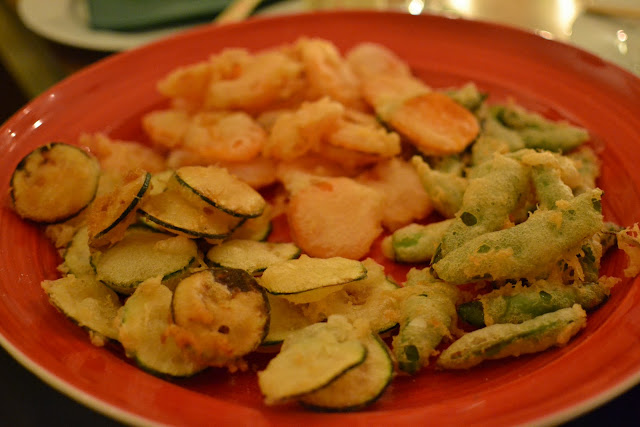 The tempura was served with dipping sauce made from 4 tablespoons of soy sauce, 2 tablespoons of mirin, 3 tablespoons of vinegar, ½ tablespoon of sugar and 1-2 cm of finely chopped ginger. The same sauce was also allowed to accompany the deep-fried sushi. 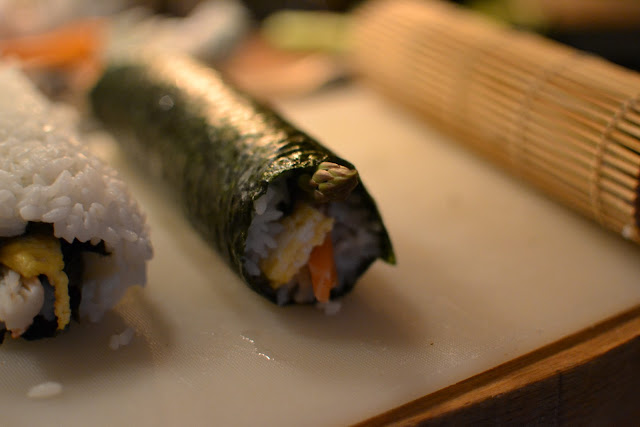 We used three different kinds of seafood; fresh salmon from the coast of Norway, king crab legs, and finally Icelandic langoustines. Sublime. We also used a number of vegetables and fruit; cucumber, carrot, asparagus, spring onion, avocado among other bits and bobs. We also crept in a bit of salmon skin. Added wasabi for some and pickled ginger for others, just allow the imagination to weave its magic. The veggies are of course cut into thin strips so they align perfectly with the sushi rolls. 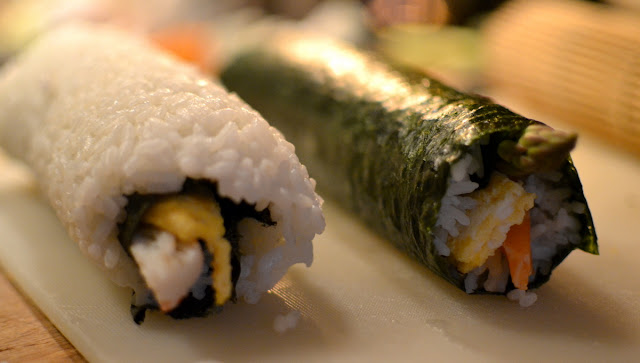 We made a few types of Maki. 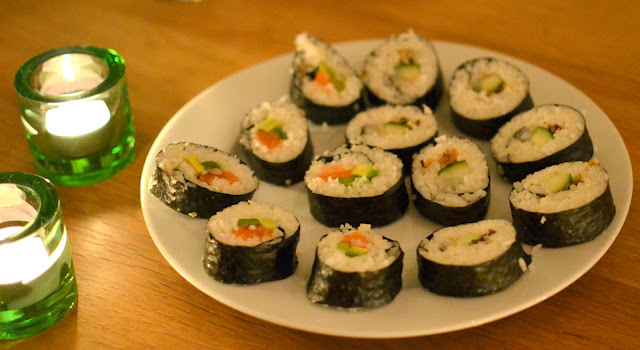 We also crafted Uru-maki , inversed sushi; the ones where the rice is on the outside of the roll. They are easier to make then many might assume. Simply layer clean film on the bamboo mat, then a layer of rice, a sheet of Nori and finally the filling. Rolls these in precisely the same way you would with normal Maki. They are more difficult to slice, so use a sharp knife when you cut them down so they wont come a part.

You can’t tell from the photos, but they were rolled in sesame seeds and red caviar. 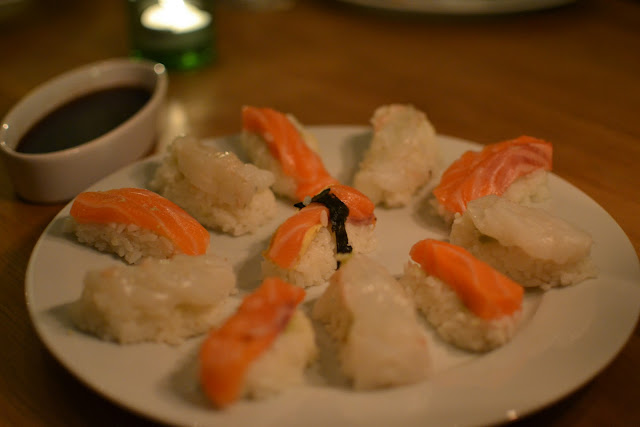 Our neighbour, Signy, made a few types of nigiri sushi, with langoustines and salmon. It is customary to place a bit of wasabi under the fish. 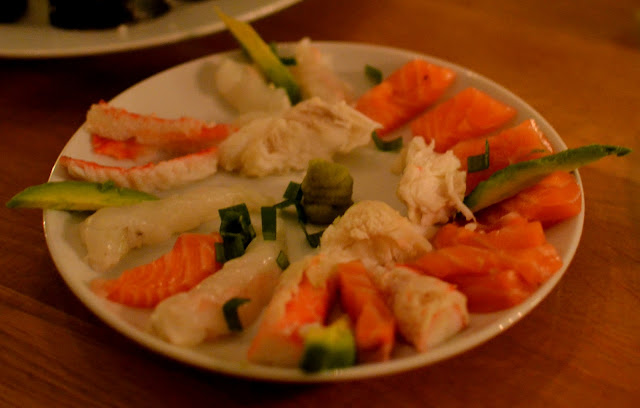 Jon Thorkell cut down the rest of the seafood and served on a plate – sashimi! 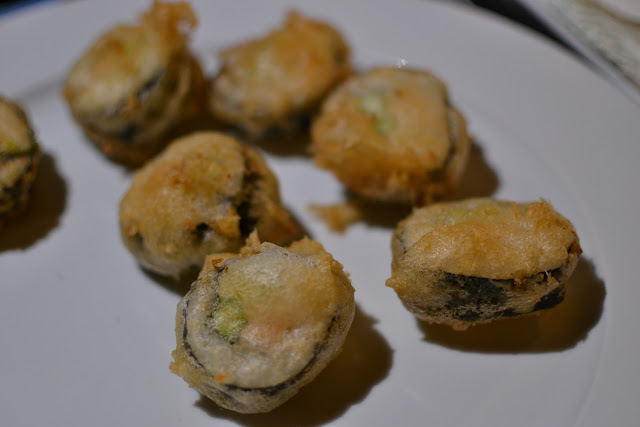 For the deep-fried sushi I simply used two rolls of maki, cut them down into appropriately sized pieces, enveloped in the tempura dough and fried in hot oil until they were golden brown and crunchy. 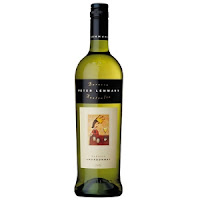 With the sushi, we of course sipped Japanese sake wine that our neighbours had generously provided and I pulled out a bottle of Peter Lehmann Chardonnay 2008 for the occasion. This wine is very satisfying, classic Chardonnay: smell of deep fruit, which also manifests itself in the taste, buttery texture and well oaked. Lovely – served well chilled with the food! 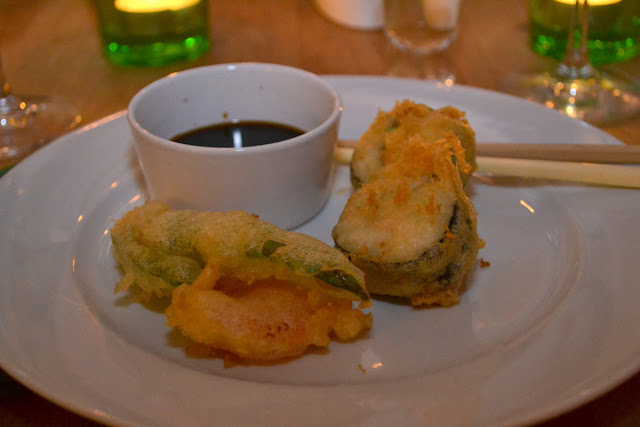